Cameron Norrie aiming for Grand Slam title after his…


VATICAN CITY (RNS) — Family dinners, changing diapers and helping your teen through a rough spot are all part of parenting.

Gregory and Lisa Popcak think of it as Catholic worship.

The husband-and-wife counselors, who dispense family and marital advice on their popular radio show, call their family-centered model the “Liturgy of Domestic Church Life.” They hope it will send ripples through the entire Catholic Church.

“Liturgy means a type of worship that God has given to us,” said Gregory, sitting in the corridor of a busy hotel a stone’s throw from the Vatican, where the two have come for the World Meeting of Families from their home in Ohio. While liturgy is usually associated with what happens at Sunday Mass, he explained, small family moments of play, talk, work and prayer can actually be an opportunity to live the Catholic faith at home.

“A lot of families are already doing this implicitly,” Gregory said, but “what they are doing can be done with greater purpose.” 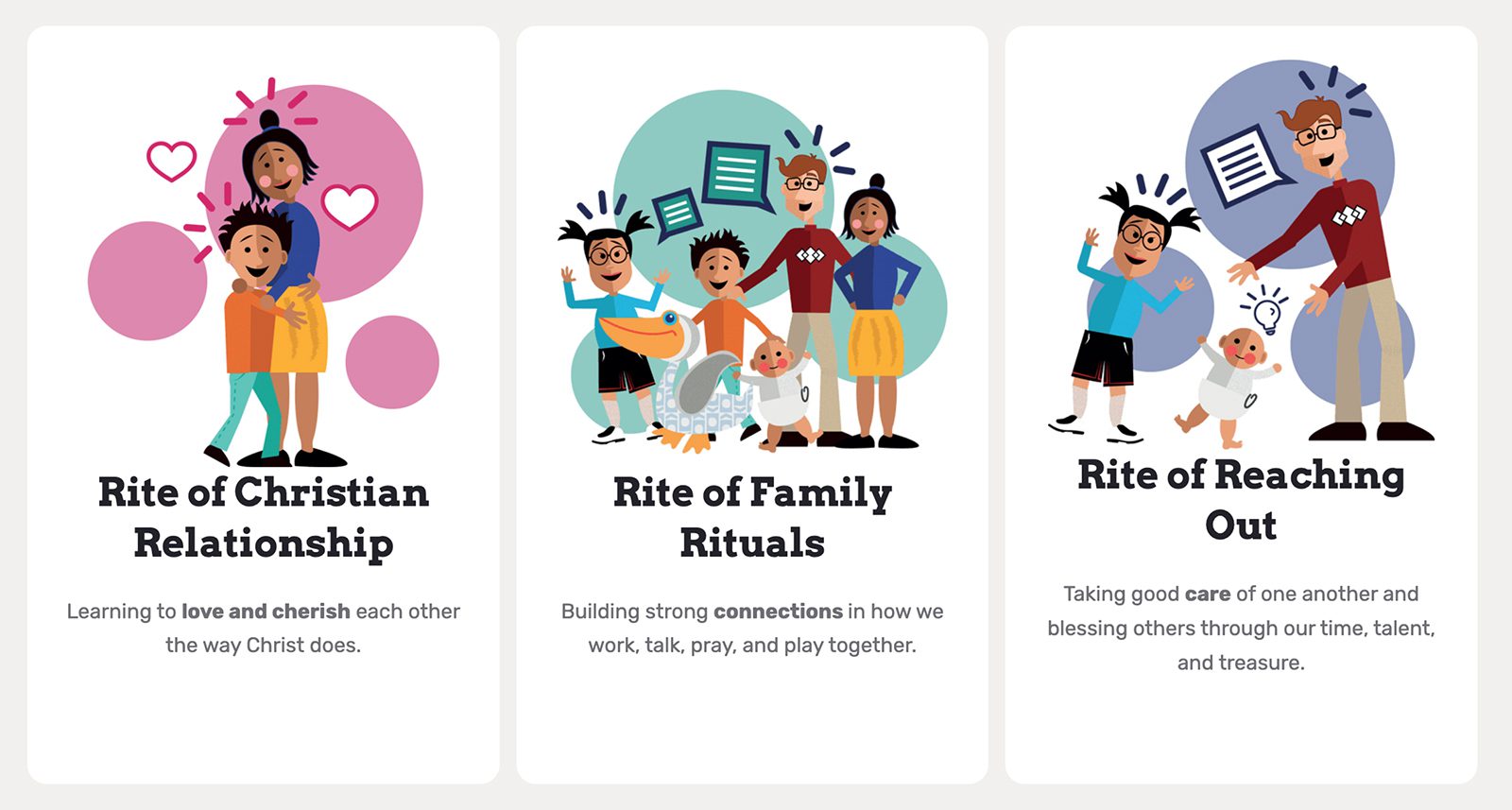 The three rites of the Liturgy of Domestic Church Life. Image via CatholicHOM.com

Instead of the church’s traditional “Corporal Works of Mercy,” a series of practices ranging from sheltering the homeless to feeding the hungry, the Popcaks praise the “Corporal Works of Mommy,” filled with sleepless nights and everyday hardships. Instead of imagining sainthood as a scantily clad man eating locusts in the desert, they offer a parent taking time from work to put their family first.

“What we need as Catholics is a new vision for what holiness looks like,” Gregory said.

But the Popcaks’ model is not only for parents, married couples or, least of all, picture-perfect families. “This is for every family, and every culture in every part of the world, in every social economic group,” said Lisa. “In every constellation of families.”

Lisa and Gregory began counseling Catholic families remotely in 1999, “way before it was cool,” he said. They have since published dozens of books and together they began hosting a call-in advice program this year called “More2Life” on the Catholic news network EWTN’s channel on SiriusXM. 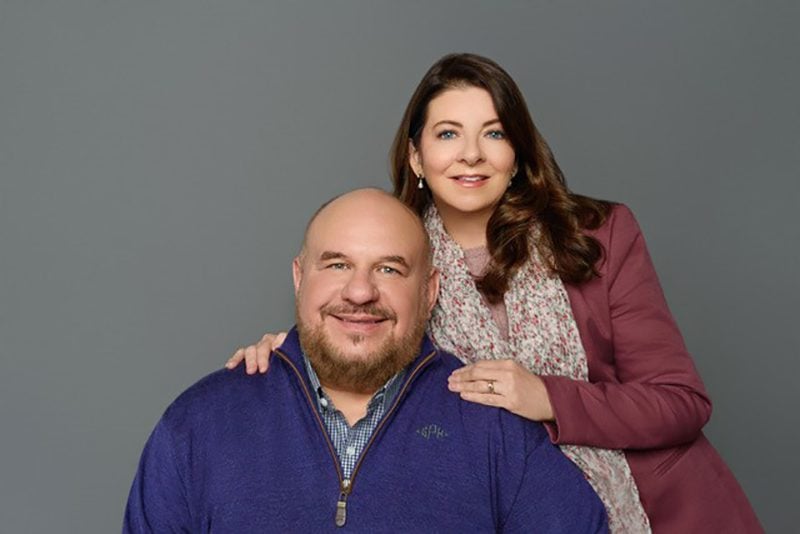 Gregory and Lisa Popcak. Photo courtesy of the Popcaks

In 2019, the Popcaks hosted a symposium titled “Catholic Life and Spirituality” at the University of Notre Dame, gathering 50 theologians, social scientists, church leaders and family experts to think about how to revive the faith within Catholic families. They discovered that despite the wealth of Catholic theology on marriage and family life, “It doesn’t really trickle down to the pew,” Gregory said.

While the Popcaks pondered on how to translate their ideas about a liturgy of the family to everyday routines, the COVID-19 pandemic hit, limiting the social, professional and spiritual lives of billions of individuals to inside the four walls of their homes.

“Suddenly there came this screaming call for help for families and individuals,” Lisa said. Many asked what it meant to be a Catholic family when you “couldn’t just check off the boxes” by going to Mass or sending your children to youth groups. “People started to lose it in terms of their faith.”

In February 2020, the Popcaks, in partnership with Holy Cross Family Ministries, became founding directors of the Peyton Institute for Domestic Church Life, “a think tank to develop new models of family prayer and spirituality,” according to the institute’s website. “I see the Holy Spirit’s fingerprints all over this, in terms of the timing of it,” Gregory said.

An accompanying app, CatholicHOM, is aimed at boiling down hefty liturgical and theological lingo into something more family friendly. Without dictating any set rules or procedures, it is meant to provide activities and resources — podcasts, videos and livestream events — that work for individual families, age groups and schedules. “We wanted to get that in the hands of families and make it as easy and doable as possible because we know how stretched everyone is,” Lisa said.

The Liturgy of Domestic Church Life was meant to start small, but it quickly drew the attention of the United States Conference of Catholic Bishops, which has given its approval, and even the Vatican. In late June, the Popcaks were invited to give the keynote speech at the World Meeting of Families in Rome.

On the CatholicHOM website, the Popcaks explain that most Catholic spirituality “tends to be drawn from the monastic and clerical traditions in the church,” noting that those practices don’t match up with family life. Statements like these resonate with Pope Francis’ desire to rid the church of clericalism — the practice of elevating clergy above the faithful — and Francis’ overall plan to reform the power structures of the church to empower the laity. Children work on a puzzle together during the CatholicHOM session of the Eucharistic Congress, June 18, 2022, at the Georgia International Convention Center near Atlanta. Photo by Carlisle Kellam

Francis has launched a massive two-year consultation of Catholic clergy and laity all over the world that will conclude with a summit of bishops at the Vatican in 2023 on the theme “For a Synodal Church: Communion, Participation and Mission.”

“Our practical experience of church is at odds with Catholic ecclesiology,” Gregory said. “The model right now is that the parish is a vending machine stocked with all kinds of ministry products, individuals go pull the lever, make donations and get whatever they want and they go home.”

This is also “incredibly depleting for the church itself,” Lisa said, adding that priests are worn out and family ministers struggle to provide support to everyone.

The Popcaks suggest that instead of making the parish the sole center of Catholic life, they should be charged with “planting domestic churches” where families can breathe new energy into the community. “Doing this will bless families, but it will also lift the burden on the church,” Lisa said. 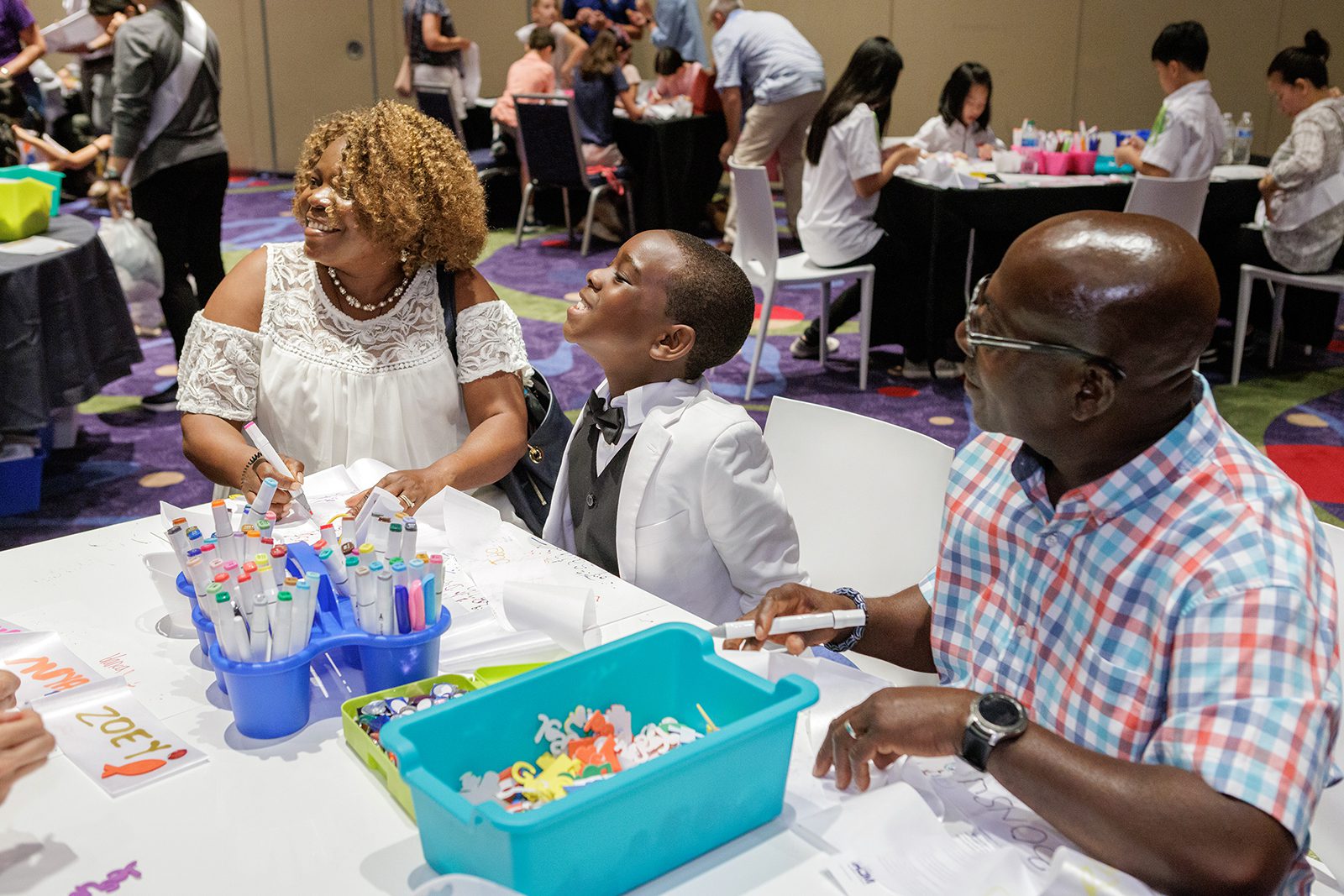 Families participate in activities during the CatholicHOM session of the Eucharistic Congress, June 18, 2022, at the Georgia International Convention Center near Atlanta. Photo by Carlisle Kellam

Gregory compared the church to a car with two flat tires — the laity — that have forced the other two tires — the clergy — to be overinflated. Chastising the clergy for the situation or, as some suggest, clericalizing the laity is not the solution, the Popcaks believe. Only if every baptized Christian recognizes their role as part of the common priesthood of the laity “we can drive down the road balanced,” Gregory said.

For now, the Popcaks work with families one at a time, but they don’t rule out the possibility of a structure to allow families to participate more actively in the church. One vehicle for their vision may be the World Meeting of Families. Launched in 1994 and held every three years, the global event serves to bring Catholic families together to dialogue and exchange experiences under the patronage of the pope.

Though it “commands the attention of the church,” Lisa believes that “now more than ever,” broadening the World Meeting of Families “could really send ripples around the world.”

RELATED: Eucharist, sacrament of unity and source of division