Who Is Lupita Nyong’o’s Boyfriend Selema…

Only Murders in the Building – Persons of Interest and Framed


It feels like a lot has changed in the last 6 months, but luckily for us, Only Murders in the Building continues to be a force for bloody yet lighthearted fun in this crazy, wild world we’re living in. While its sophomore step out of the gate is surprisingly conservative at times and wildly uncharacteristic at others, it’s not altogether unentertaining, and I remain cautiously optimistic for a second season just as juicy, twisty and hilarious as the first. Read on for my review of the first two episodes of Only Murders season two: 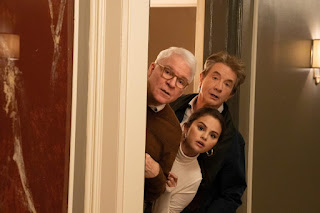 In case you forgot what happened at the end of the first season (although I doubt you could): Charles, Oliver and Mabel are the lead suspects in the murder of Bunny Folger, their former building president who held a hefty grudge against the gang for their variety of Arconia-related hijinks. In order to clear their own names (and combat the ratings Cinda Canning’s new podcast about the case), the team behind “Only Murders in the Building” set out to create a second season of their famed true crime podcast and find Bunny’s real killer. While we are only two episodes into the season, it already feels like the writers are dissatisfied with this as a plotline, however. Much of these first two episodes feel like attempts to retcon as many elements of season one as smoothly as possible.

Right out of the gate, the show is oddly non-committal to its main mystery; yes, the trio are arrested and questioned for Bunny’s murder, and yes, it’s brought up about 50 times an episode that they are the police department’s lead suspects in the case. But ultimately, I sense a bit of regret in these first two episodes that the writers dove into a twist so twist-y in the season one finale. Most of the characters around them ignore or brush off the idea that the trio were the only ones present at the murder scene and that Mabel was found covered in Bunny’s blood at the time. Like, yes, we know that they didn’t do it, but why does everyone else? The most egregious example of the supporting characters clearly not caring about the plotline of the season happens when the police not only immediately let Mabel back into her apartment where Bunny’s body was found but also… leave the blood from the crime scene on the floor for her to scrub up at her own leisure? Plot elements like this may be minor in the grand scheme of things, but seem indicative to me that the writers wished that hadn’t gone quite so hard in the premise for this season. Perhaps that will change as the narrative goes on, but for now, it’s nearly impossible to overlook.

There’s actually quite a bit that the show seems unwilling to carry over from its first season, to an extent that it feels ridiculous at times. Charles and Oliver don’t do much in the first two episodes (although we do get the beginning threads of a storyline about Charles’ father in episode 2). That means that much of the narrative weight of the first two episodes lies on Mabel’s shoulders. That in itself is not a problem, but the convoluted way that her storyline is used to insert in all of the new things the writers wanted to try this season feels a bit cringeworthy. It seems they were unhappy with Mabel’s chemistry with Oscar, so their budding relationship was killed offscreen and shrugged off in a single line. It also seemed like they felt that Mabel didn’t have a reason to want to stick around and solve Bunny’s murder – although that feels odd to think, considering that she is still a true crime junkie and now she is also fighting to clear her own name. Either way, a lot of these introductory episodes feels wasted on finding a variety of reasons why Mabel is doing everything that she’s doing, even though her motivation could easily be assumed.

To add: there is nothing hypothetically wrong with deciding to take Mabel’s character in – ah – “a whole new direction.” But spending so much time on it only to do it so clumsily feels like a betrayal of a very layered and already well-loved character. Selena Gomez is doing great work so far this season – her confidence in playing Mabel feels much higher, and the underlying sense I felt in parts of season one that she possibly didn’t want to be on this show in the first place is completely gone. It’s just unfortunate that her character is now being treated like an Etch-a-Sketch that the writers can shake and redraw on any time they like.

Another slightly questionable new addition this season is a lump of new cast members, upsettingly obvious replacements for some of the more underwhelming season 1 supporting characters (Sting), as well as the ones that deserved more depth than the narrative would ever allow them (Oscar). In evaluating their usefulness to the story, each new character contributes differently and must be evaluated individually. 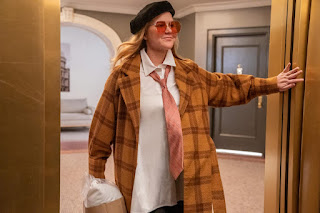 Cara Delevigne, while not normally a phenomenal actress, plays well off of Selena Gomez here as a mysterious artsy-type that is helping Mabel process her many decades worth of trauma. Shirley MacLaine is practically playing herself in her role as Bunny’s eccentric mother. Well, more accurately, she’s playing “aged and well-respected celebrity cameo,” but she’s still Shirley MacLaine, so she’s playing it well. Amy Schumer, on the other hand, feels like an even more useless character than Sting did, and I am horrified to see that it seems like she will play a major role in the narrative. Regardless of your opinions on her comedy, all of her scenes and jokes fall pitifully flat, with Martin Short having to carry the weight of both of them every time she appears on screen. In episode one’s elevator scene, I could almost feel the director begging me to think that their exchange was funny, when in reality it was just Martin Short delivering punch lines across from a paper bag in a stylish coat.

Although, speaking of stylish coats, the one thing Only Murders is faultlessly consistent on is style. Pretty much every scene in every episode continues to deliver deliciously good fashion moments that make me drool with envy (and spend a couple hours on Poshmark seeking out lookalikes). Euphoria? Never heard of her – my #1 style icons are the Only Murders crew. Mabel’s outfit at the art gallery in episode one was especially gorgeous, and while this may be my own biases talking, I feel that the costuming of this show is a major contributor toward its success. You can argue with me about it, but you can’t deny that the New York City aesthetic is a crucial vein in this show, and the costumes are an essential element of that aesthetic. Regardless, I’m putting my foot down: the costuming team deserves well more than whatever they’re being paid. 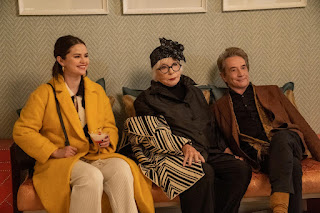 Mixed feelings aside, however, this season is really more promising than it is not. The mystery feels more tightly-plotted than in the first season, and hints at a storyline connecting Charles’ family to the mystery are tantalizing. The comedy is still on-point – and with stars like Martin and Short, how could it not be? – and the drama, while light so far, was equally good.

My only hope is that the writers’ seeming crisis of confidence eventually leads to creative innovation. I think it will, but then again, Only Murders is a show that constantly surprises.