A second suspect is arrested and charged in the murder of fallen Selma police officer Marquis Moorer.

Moorer was killed while on lunch break at the Selma Square Apartments back in July — in an ambush style shooting. 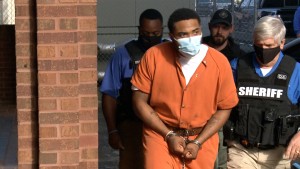 He’s the second suspect charged in the officer’s death.

“And this might not be the end either,” said District Attorney Michael Jackson.

“The investigation is ongoing. There could possibly be more arrests. We want to make sure that everybody that’s involved gets arrested.”

He’s accused of shooting a rifle into Moorer’s apartment — and killing him and wounding his girlfriend.

“This has been a devastating situation for the community. And he was an on-duty officer and he got shot and killed with a rifle.

Eighteen year old Javonte Stubbs of Selma is also charged in the case.

THE PARK AT OWA: Foley Alabama

Bahamas Sandals deaths: Independent autopsy to be conducted on Alabama native among 3…

Man, 40, found shot to death inside his home in Lamar County

Actress Diany Rodriguez talks ‘The Valet,’ being a force for representation in entertainment and more

Bahamas Sandals deaths: Independent autopsy to be conducted on Alabama native among 3 who mysteriously died