Al Stanley was destined for the construction industry |…


Romelu Lukaku is officially an Inter Milan player again after completing his season-long loan move from Chelsea, with no obligation to buy.

Inter will pay Chelsea a loan fee of £6.9m plus £3.5m in bonuses if they win the Scudetto, and will cover all his wages this season.

The Chelsea striker flew into Milan Linate airport around 6.20am local time and posed with an Inter scarf before getting in a car.

“I’m so happy to be back,” he said. Having completed his medical, Lukaku has officially been announced as a new Inter player.

After the move was confirmed, Lukaku revealed he had remained in touch with Inter coach Simone Inzaghi after his departure last summer and was pleased to be back.

Asked what convinced him to return, he said: “The affection of the fans and my team-mates, but also the opportunity to work with the coach. I stayed in contact with him all last season. I think the coach is doing well with the team. I want to contribute and do good for this club.

“It’s like coming home. I think my family and I had a really good time in Milan thanks to the people, the fans and my team-mates. From the first day when I arrived here everyone helped me a lot, I’m really happy.

“I didn’t even leave my home when I went to England, which shows how happy I am to be back here. Now I just want to see the guys on the pitch.”

Lukaku is now hoping to build on his previous successes with Inter, who finished runners-up to AC Milan and won the Coppa Italia without him last season.

He added: “Inter have given me so much and I hope now to do even better than before.”

Lukaku also thanked president Steven Zhang for closing out the deal after complicated negotiations with Chelsea over the financial terms.

He said: “It seemed impossible for me to come back here but we made it and for this I must also thank him. He continued to push and believe

How the deal got done

The Belgian has agreed to a 30-per-cent pay cut to smooth his exit, with his earnings set to drop from £10m per year after tax to £7m.

In December, Lukaku told Sky in Italy he wanted to return to Inter one day, saying: “I really hope in the depths of my heart to return to Inter, not at the end of my career, but at a still good level to hopefully win more.”

Last week, it was revealed Inter cannot afford to sign Lukaku – who scored 64 goals in 95 games and helped them to the Serie A title during his time at the club – on a permanent deal. 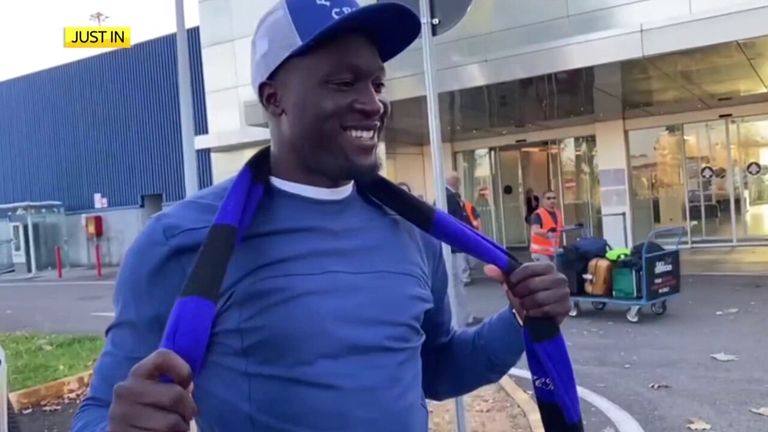 Romelu Lukaku has arrived in Milan to complete his loan move from Chelsea to Inter. The Belgian striker even posed for photos with an Inter scarf.

Chelsea decided to let Lukaku leave after talks between Todd Boehly – who was appointed chairman and interim sporting director on Wednesday – and Thomas Tuchel, as well as discussions between Boehly and Lukaku.

The owner and head coach wanted to resolve Lukaku’s future quickly so they could focus on strengthening their squad this summer.

Inter Milan Chief executive Giuseppe Marotta says the club are in no rush over a potential return for Romelu Lukaku but remain keen on re-signing him this summer after an interview he gave Sky in Italy last December.

The Blues are also in talks with Leeds over a deal for winger Raphinha, with the club prepared to sanction a deal in excess of £50m to get the deal done.

Inter ultras: We won’t welcome Lukaku with scarves or banners

Inter Milan’s ultras have issued a statement asking fans not to welcome Lukaku when he arrives in Milan.

The club’s most loyalist fans say he will have to earn their respect again through his performances after he left last summer to rejoin Chelsea.

A statement read: “Since Lukaku’s return to Inter is very likely, a few things need to be made clear.

“Curva Nord supports Inter Milan and will not stage any protest against the player (despite his behaviour last summer). That being said, nobody shall go and welcome him with scarves and banners representing the Curva or its groups. He will need to earn everything that, in case, will be done for him in the future with humility and sweat on the pitch.

“It shall also be clear to everyone that we will never cheer against Lukaku if he will wear the Inter jersey again.

“We encourage all Interisti [Inter fans] anyway not to fall in the other trap, to run and drool after him.

“Clearly there is an instinctive and emotional element, but to pretend that nothing has happened would only accelerate that process aimed at making us all dumb and slavish consumers.

“We took note of Lukaku’s betrayal and we were extremely disappointed.

“With time we can even forgive such things to a footballer, but the facts won’t change.

Analysis: Where did it go wrong for Lukaku at Chelsea?

Kaveh Solhekol and Dharmesh Sheth discuss whether Romelu Lukaku is one of the worst Premier League signings ever, as the Chelsea striker is set to return to Inter Milan.

“Lukaku is a player who always likes to be facing the goal, not playing with his back to it. With his power and his pace, he’s very difficult to stop when he’s in his flow.

“But when he’s playing with his back to goal, it’s never been the best part of his game. The way Chelsea play, they need their No 9 to be the focal point where they play it into him and he can set for them to play in behind. Especially when you’re playing against a low block.

“Chelsea plays teams who like to sit back a lot, which makes the role of the No 9 very important in terms of his ability to play with his back to goal, to bring others into play.

“It’s down to Lukaku to then score goals in the second and third phases but it’s why I don’t think it’s happened for Lukaku back at Chelsea.”

Marco De Micheli from Sky Italy says they are expecting developments in Romelu Lukaku’s return to Inter Milan from Chelsea over the next few days.

“It’s got to be a combination of the player and the coaching staff. This is the really important thing about recruitment. You can’t deny that Lukaku is a fantastic, top player as he’s scored goals on the international scene and scored many goals in top leagues.

“Chelsea play a certain brand of football which they haven’t wanted to come out of. Maybe getting a striker who isn’t as big a name as Lukaku but that fits their system is perhaps a better way of going about their recruitment.

“Antonio Conte got the best out of Lukaku. Romantically, you look at it and wanted it to work as he loves and supports Chelsea.

“Coming back here, you thought he’d had the experience he needed at other clubs and in other countries and you felt he was now ready to take on the mantle of being Chelsea’s No 9 by winning loads of trophies but unfortunately it didn’t materialise.”

Which positions are Chelsea targeting?

Chelsea are pressing ahead with their summer recruitment plans now that the £4.25bn Todd Boehly-led consortium takeover of the club has been completed.

The Blues have a verbal agreement already in place with Sevilla defender Jules Kounde, with the Spanish club preferring a quick deal as they aim to balance their books before June 30.

Talks on a deal for Kounde had collapsed last year but there is optimism from all parties it will get done this time.

Paris Saint-Germain’s Presnel Kimpembe is part of a shortlist of central defensive options and is Thomas Tuchel’s preference. Atletico Madrid’s Jose Gimenez and RB Leipzig’s Josko Gvardiol are also among those being looked at.

Chelsea kick off their 2022/23 season with a trip to Frank Lampard’s Everton live on Sky Sports before hosting London rivals Spurs in their first home game.

Chelsea will host Liverpool in West London on September 17, Manchester United on October 22 and Arsenal on November 5.

Their final fixture before the month-long break for the World Cup is away at Newcastle, and they continue their campaign on Boxing Day against newly-promoted Bournemouth.

Chelsea travel to Tottenham on February 25 and Arsenal on April 29, with the latter the start of a bumper last five games including Manchester City away on the penultimate weekend of the season and Newcastle at home on the final day.

Who will be on the move this summer before the transfer window closes at 11pm on September 1?

All The Details – Hollywood Life